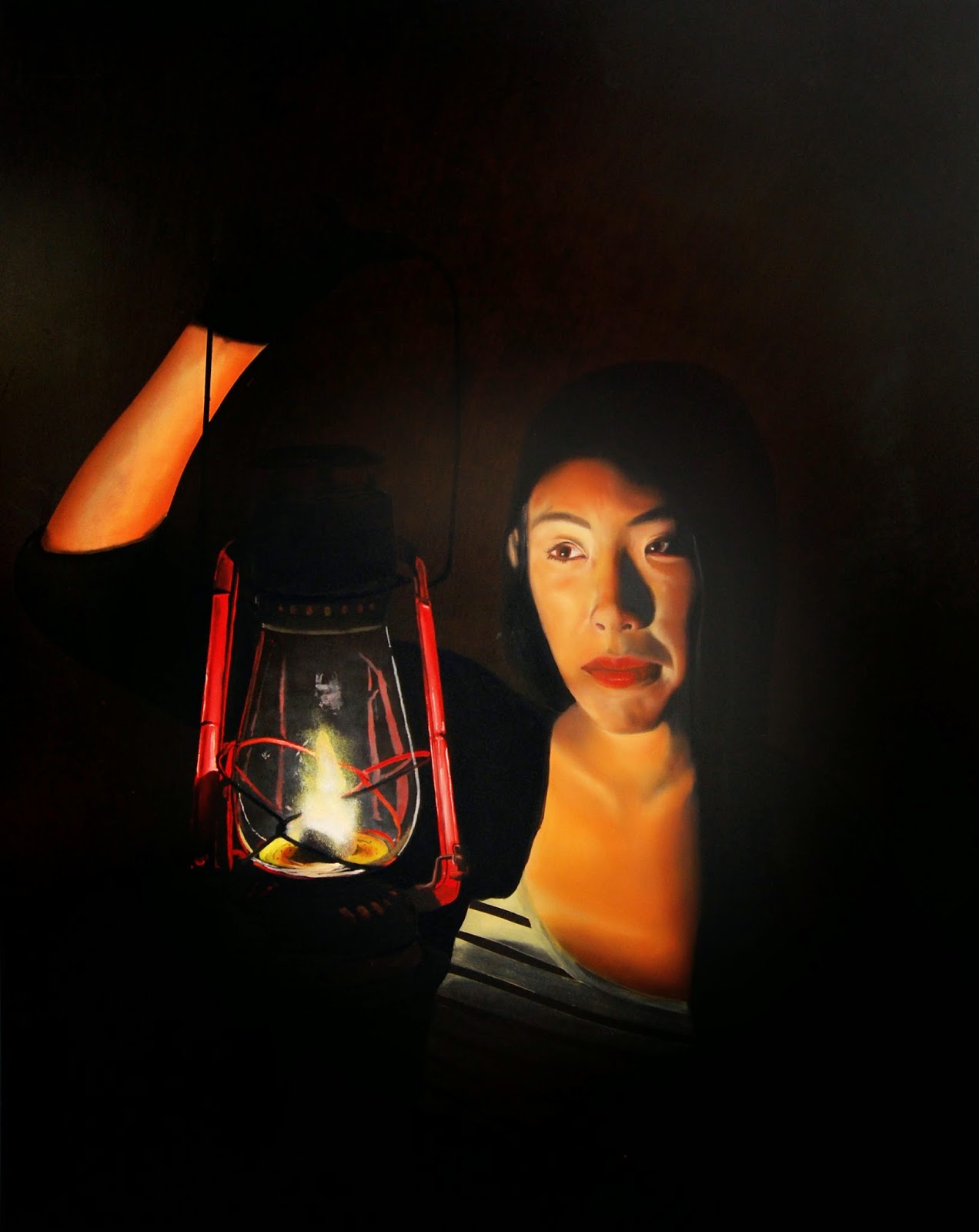 My first visit to the sixth annual Fountain Art Fair this March was overdue – sorry about that. Not only was it held at the original 69th Regiment Armory on Lexington surrounded by cool army trucks and humvies, inside was a super varied collection of art by young emerging artists and galleries of all types. These people wanted to talk about their work to an unassuming critic from Philadelphia. I felt like royalty, something I’m not used to at larger fairs where gallerists figure courting some shady on-line review is like pissing in the wind. Enough said. I was not planning to review the show but after a few conversations I changed my mind.

The Sculptors Guild from Brooklyn has been a stalwart institution since 1938. Included was an ex-MFA student of mine from Moore College of Art, Laura Petrovich-Cheney. It is always wonderful to see artist’s work and career develop. Her carefully constructed wood assemblages of found objects have a complex role. The piece, Washed Up, was part puzzle, part environmental comment and something re-utilized. Subtly arranged blue cast-offs formed a larger field of color, a perfect mix of painter’s eye and weight of sculpture. I wanted to own it but agreed to keep a look out for derelict doors for her in the meantime. No effort for a scavenger like me! Chuck Glicksman’s and Ginger Andro’s lumiscope, Jumping Hurdles was a carnival-like take on Eadweard Muybridge’s jumping horse. That crazy Muybridge was trying to prove horses fly! The piece was a reverse carousel where the moving images were projected on the outside rather than glimpsed through spinning old-time arcade amusements. The result was a reflective merry go round or “optical” flipbook, we all agreed, “Was it Vermeer, Plato or prehistoric man who’d first thought of the camera obscura?” Our discussion of optics continued with the bar staff at Molly Malone’s on Third Avenue after the show.

Around the corner, I ran into Dave Tree of the Murder Lounge, a Boston art collective. Fantastic and fitting title for a pop-up gallery or anything for that matter. He was responsible for hanging the entire center aisle of several cubicles with his cohorts. His own work was at the entrance and so was he. We had an interesting conversation while he summoned his inner salesperson. I asked if he’d sold anything after three days in New York and was stunned by his answer. “No? That wooden cut-out print of diseased, hormone-rife corn is only 150!” I said, “New Yorkers smoke cigars that cost more.” He suggested slyly that I might start the ball rolling and made me an offer I couldn’t refuse. Not just a pretty face. Another artist joined us, David Hollier from the McCraig+Welles gallery booth nearby. His work was right up my alley: paintings of celebrities (new and old) from a series called ‘Imago Verbosa.’ The portraits were formed entirely from verse or prose, the words carefully painted, some even typed on an old Smith–Corona. Most of the celebs were from the “27 club,” pop-stars whose lives ended at 27. Jim Morrison was opposite Kurt Cobain completing a not so serious history of rock. Jimi Hendrix was missing, as was Janis Joplin, thank goodness. They both get overplayed, don’t you think? A dark, smaller picture of Amy Winehouse snuck up on me, a super creative stick of self-destruction. It almost made me cry. There is, no doubt, something inherently dangerous about being 27. Mr. Hollier, a charming, bearded man originally from Wolverhampton, England lightened the theme by adding Gandhi and Rodney Dangerfield. Quite a sensible contrast.

With a similar pop zeitgeist, artist, Marianne Hasenoehrl-Obsieger of Vienna had a whole booth to herself and was thrilled to have finally secured representation in America. It is possible with the right sort of perseverance! I asked about her interest in old film stars. I had mistaken Grace Kelly for Ingrid Bergman – I should know better! These accessible graphic design-ish, paintings reminded me of eighties Warhol. That re-assured me. The best lessons of Pop & POMO weren’t completely dismissed after 6 or 8 years of heyday. Emotional, we hugged goodbye, wishing each other success. I thought of Andy’s oft over-used adage about fifteen minutes of fame. It used to mean just that. Now, it seems to refer to a cultural flattening where everything and anything is of equal import; the bar both lowered and raised. What’s the diff: temporary high profile or low level permanent obscurity for fifteen seconds on social networks? There is nothing left but to proceed, success or no.

Judy Mauer’s beautiful photography also impressed me. At first they appear to be large collages or Photoshoped city-scapes with figures but on closer inspection reveal themselves to be reflections in shop windows with reality depicted in front and behind the photographer all taken in a single moment. This created an uncanny sense of multiple trompe-l’oeil where the models and buildings fused to create ambivalence. Before I left, I noticed a Baroque-ish painting in an ironic and gaudy frame by a young artist, Michael Hurt. It showed a young Asian woman lit by an incongruous 18th century lantern. Clearly there was a personal rather than mythic tale being represented in this series. Lost lovers? It was here my review began to solidify. The street art angle of Fountain was merging seamlessly with an academic sense of art history, twisting every which way. The picture had just the right amount of irony and apprentice-like panache. Had it been better crafted it would have lost all pathos and meaning. At first, I thought he was referencing George De La Tour because of the dramatic internal candlelight. My Baroque is a little rusty. We discussed Caravaggio as major rock star. Did he die at 27 too? No, but Basquiat did.  Everyone began packing up. I’d forgotten the dreaded time change had occurred the night before. Klutz! The impulsive Dave Tree thought he’d go out with a bang: an impromptu suicide on the floor with one of his hilarious gun constructions, half flintlock, half semi-automatic pistol. As I departed, they were drawing a chalk outline around his body. 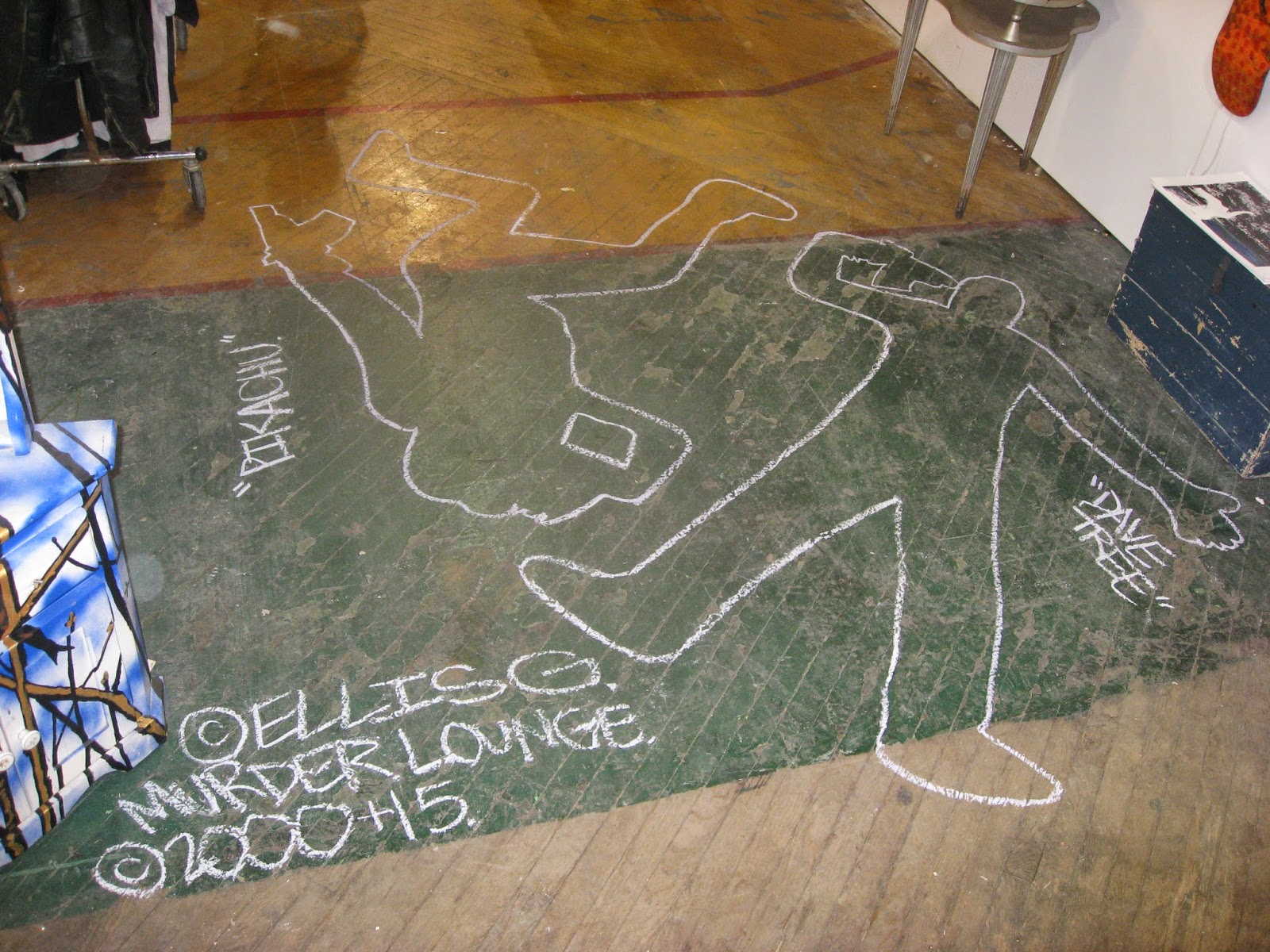 Posted by POCKET INTELLECTUAL at 7:51 AM