If Nick Cassways’s first solo show at James Oliver Gallery extolled the virtues of sociality – the importance of the artist’s social life; friends and family – his second show entitled, Dramatic Play, is just plain fun. The exhibition may be a not-so-veiled homage to the shocks of parenthood and our sometimes awkward interaction with children. As they say, children are the future, so we’d better teach them manners, at least. That is why adults should not whip out the smart phone at dinner to show the latest funny on You-Tube. It’s rude! If Cassway documents this “edge of banality” of contemporary life, he is doing us a favor. He does politely curate his own photos giving us a quick look in the mirror. Then it’s gone! They may be ‘trivial’ but that is the point. What is an iconic image these days? Good question. Awash in the Throw-Away, photography suffers from cultural inflation of a sadly, great magnitude. Singular meaningful images are getting rare, admittedly.  Without any real drama whatsoever, what’s left? Ask Andy Warhol? The focus is on the day-to-day, simple moment to moment. I may be partial to Cassway’s flattering portrait of my good-self as “the critic,” complete with gold leaf background but I don’t think that should exclude me from reviewing his recent show. I may know the artist’s methods as well as anyone. We play (and collaborate) together all the time! One of the laughing faces, “Uncle Jimmy,” seems to be reacting to my would-be, barbed comment. 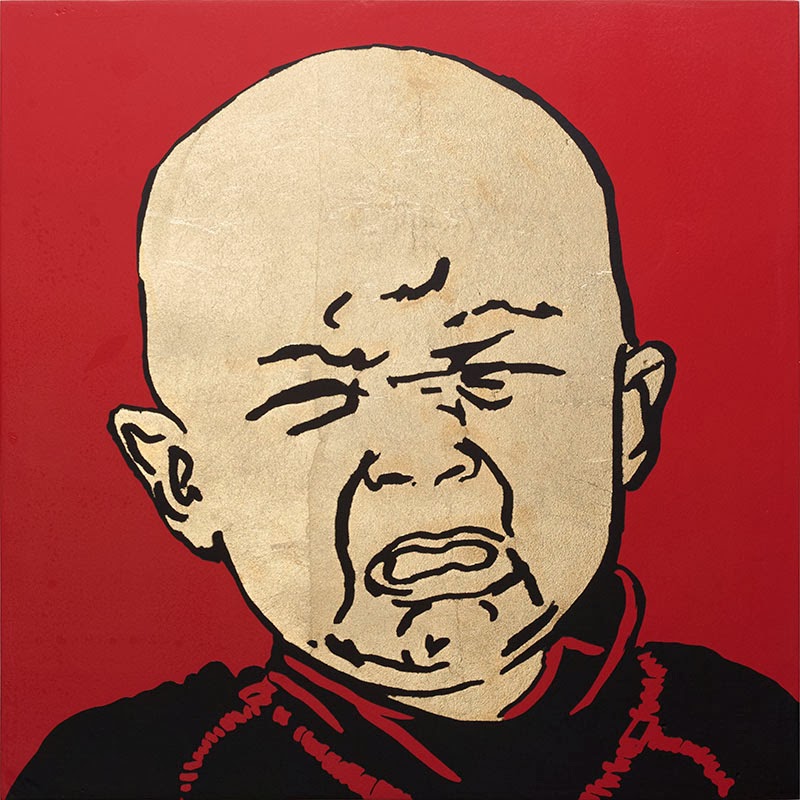 Of course, viewers can see the artist’s own dramatic play in making his pictures, Cassway’s joy of work. Although the artist refers to the pieces as drawings, I think he is being modest. Though particularly flat, the images have the weight of fully fledge paintings. He pulls subjects from digital snaps (often party scenes) then manipulates them in design programs. These mundane shots are then adapted and printed using a handy, state of the art vinyl sign maker. That gives the portrait work a guaranteed affiliation with Warholian factory process, a distant but constant relative. Though, the artist probably owes more to the satiric observations of Hogarth or James Gillray. Applying gold leaf adds a surprising historicity and an ironic nod to the Byzantine. Whether painted, drawn or digitally printed, the results have a printers’ detail for subject. The impact of the initial image is utilized but pushed in a specific decorative direction though the intentions can be left open to reading. Cassway has an exquisite sense of color that can hit you in the head. The larger groups of adults and kids – party scenes full of meat and drink – involve more complex design while the wall lined with various, individual offspring has the most direct punch, a badge of honor for new parents. Individual kids’ expressions are scrutinized and, in cases, exaggerated. Several are on the verge of serious meltdown, the dreaded public tantrum for all to witness. The installation could have been called “Parent’s Worst Nightmare.” As a veteran of fatherhood, I have an almost Pavlovian response to run.
Posted by POCKET INTELLECTUAL at 10:07 AM